A few of us (read * founders* ) in the company had the ominous responsibility called the… “Yearly Compensation Revision”.

We dreaded it. Every year. 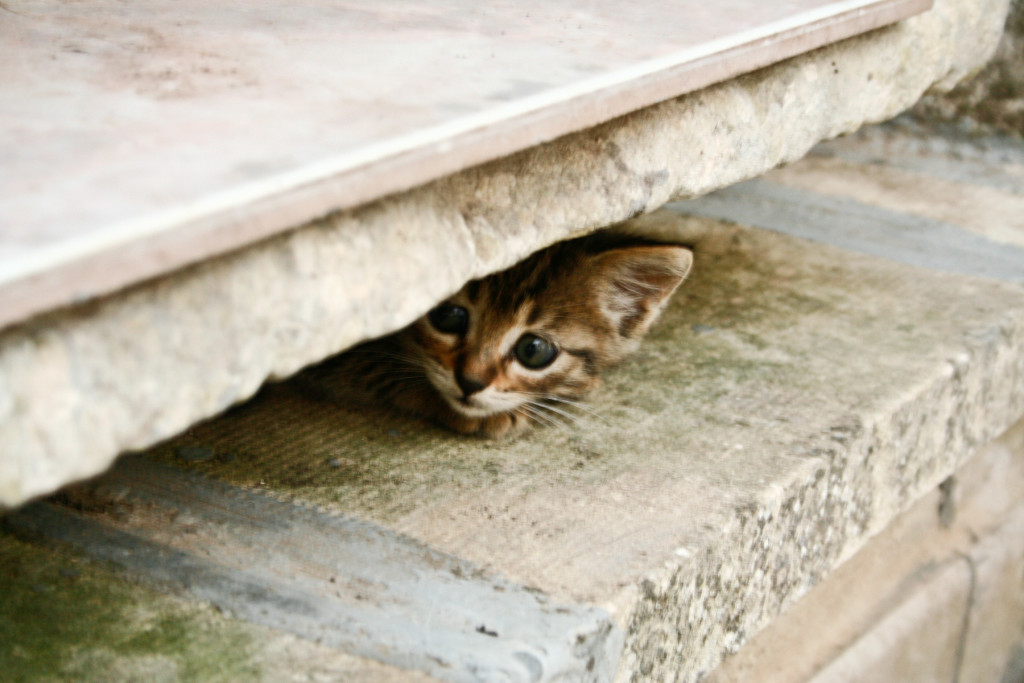 We wondered: What would be the exact opposite of what we were doing?

Those were the questions that intrigued us to a point, that we couldn’t shake the curiosity off any longer. So after many years of being afraid to do it, we finally bit the bullet.

We did two things:

If you’re curious how the system works, check out our open playbook and our public spreadsheet template.

The focus of this post series is to share our experience doing this for the first time. We made a ton of mistakes but also learned a lot.

At the end of it all, what I think we’ve succeeded in doing is starting a movement of transparency and autonomy at Multunus. From that perspective, this was a * bang* of a beginning. :)

We waited 7 years to launch this system because of the significant social and financial risks involved.

A key motivation however to open things up is that we’re building a world class consultancy. In a workplace place like ours, there’s little place for ill-informed people to exist.

The whole team needs to be aware of what’s happening in our business. Everyone of us also needs to feel a great sense of ownership in our company. Only then, can all of us confidently represent our company in front of our customers.

A key ingredient to create that sense of ownership: Trust.

One of the key challenges we’ve struggled with is creating a high sense of trust between the founders and the rest of the team. This is a bit of a chicken and egg situation. Which group should go out of its way to demonstrate trust first?

No prizes for getting this right. The founders have the key responsibility of taking proactive significant steps to create a high trust environment. We believe that kind of gesture combined with great doses of patience will result in propagation of trust across the whole team in all directions.

So we made the following decisions to:

The autonomous salary system was the first step in the above direction.

We had the following goals for the new compensation system we were putting together:

To list out the risks of launching this kind of system, we:

From the research and surveys, we found two broad types of risks:

The rest of this post will focus on the Social Risks and how we’ve tried to mitigate them. Part 2 of this series will detail the Financial Risks.

The first step we took was to standardize the salary structure using a “Salary Formula” (very similar to that of Buffer). This Formula would serve as the basis for salary calculation for everyone across the the company. This is also a great way to increase fairness.

We added a fourth component: 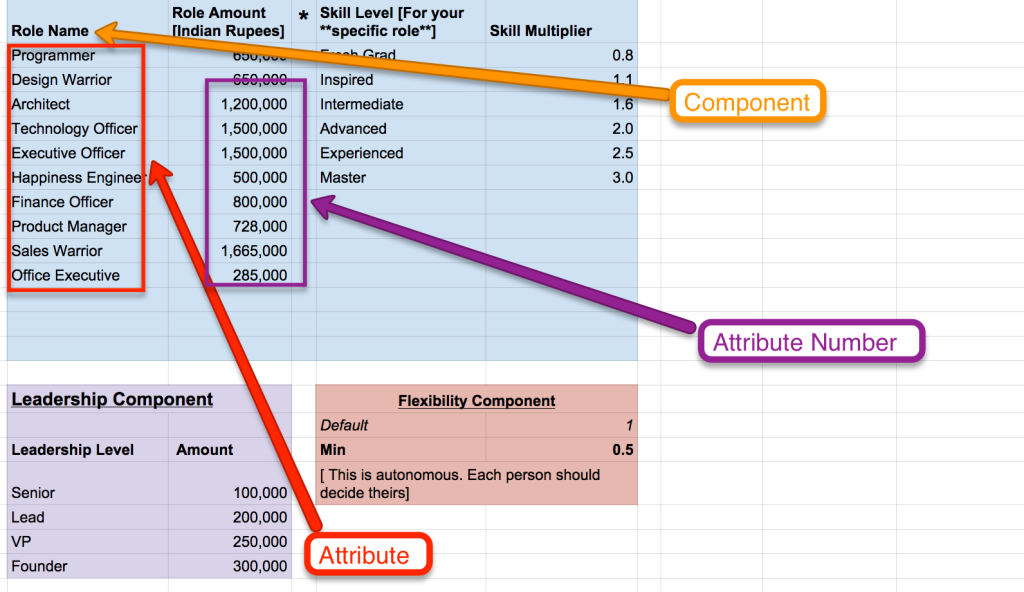 While the above formula structure was a great start, we still had to determine what attributes and attribute numbers would make sense for us. Specifically:

We knew multiple iterations would be needed until we had the final list of attributes and attribute numbers that would work for everyone.

As mentioned earlier, we also had two additional goals:

To achieve both of those goals, we created a 3 Circle Org Structure: 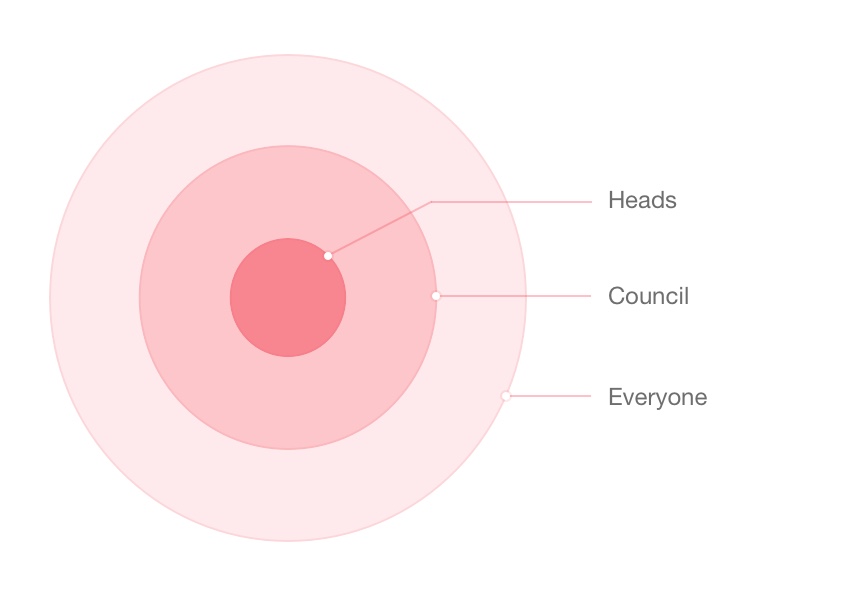 Heads: We already had a Business Unit “Heads” group - that would meet every week to discuss and plan progress of our company.

Council: We also had some team members in the company who had already been demonstrating some level leadership in the company - so, we invited them to create the “Council”.

And finally we had everyone else.

Side Note: We prefer to use circles rather than a pyramid - because this is not really about authority and control - but more about efficiency, pragmatism and responsibility. The folks at the center are held more accountable to ensure success of the process than the folks on the outer circles.

We iterated through the process of plugging in numbers for each of the components until we had something that we thought would work for everyone. The Heads would first come up with some values for each of the components in the formula - and then invite the Council members to provide feedback. And when the Heads and the Council were in sync - we were  ready to involve everyone else in the company - and get their feedback.

The Evening of Chaos

We scheduled a 2 hour marathon session one late afternoon to meet with everyone. The goal was to get everyone’s numbers decided, finish the whole process and just move on with our lives.

This however turned out to be much harder than what we’d expected. It was chaos.

The goal was to decide on the formula numbers for all roles, skill levels and leadership levels across everyone across the company. We’d assumed (naively) that people would be focused on the whole team and not be tempted to find out how the formula would affect their own numbers.

We had a deadlock between what people felt was good for everyone in the company and what met their own personal salary preferences. After many attempts at changing the numbers over and over again for over 6 hours - everyone just got tired and went home (really late!).

At this point we were at our wit’s end. Things were looking quite sticky.

We however learned the following 3 key things:

Breaking the deadlock - at the cost of some Transparency and Autonomy

We made the following changes, to implement the above learnings: 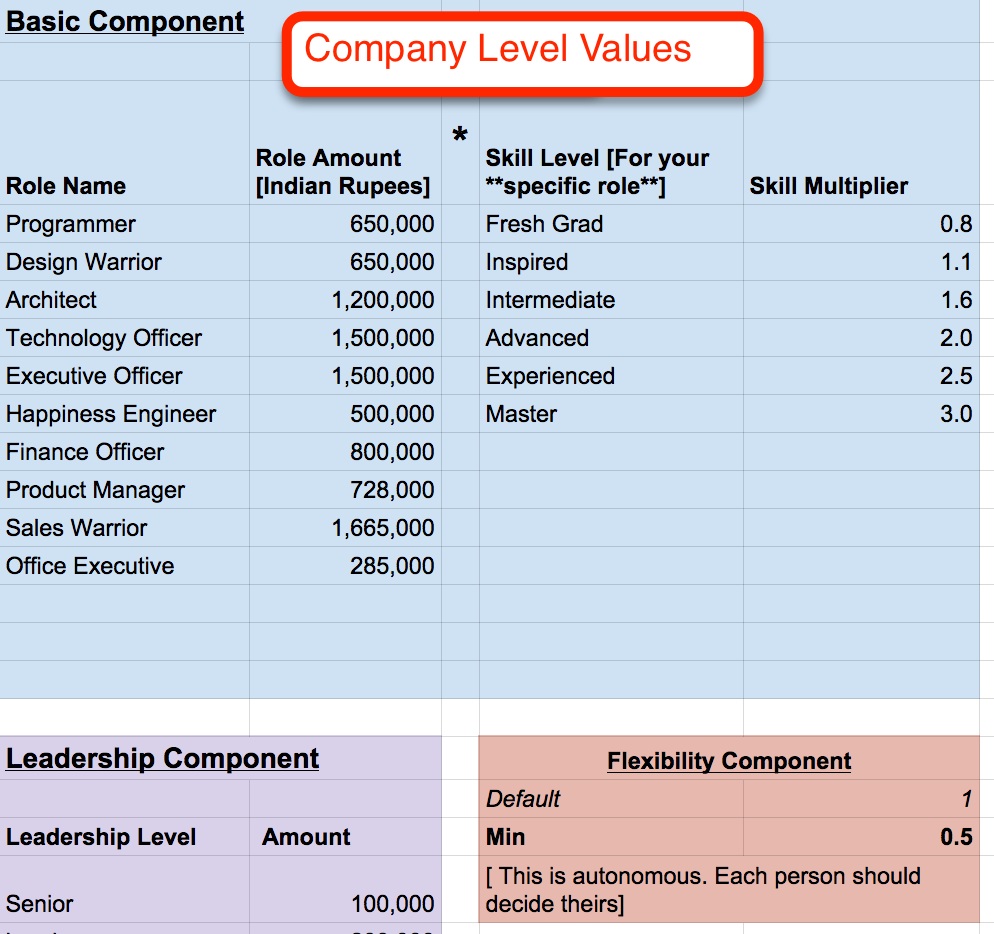 The heads got together the next morning and came up with the following changes to separate the Company and Individual level numbers - albeit at the expense of significantly reducing transparency and autonomy:

Figuring this process out was one of the more complicated projects we’ve attempted. But it was also: