Have you ever used Skype? or do you use it daily or at least once every week?.

How many times have you thought about what did it take for Skype to be where they are today as a business?

Skype initially started as an instant messaging and a voice chat service. Later in 2011, video chat was introduced by partnering with Comcast. Skype user base grew significantly after the introduction of video calling. As on January 2016, there are 300 million active users. 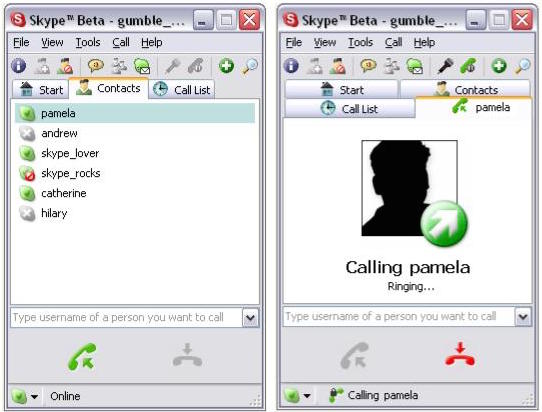 To Learn more, you can watch this video by Ash Maurya (~ 20 mins) explaining each block in Lean Canvas through an example.

Below is a Lean Canvas that I have come up for Skype. 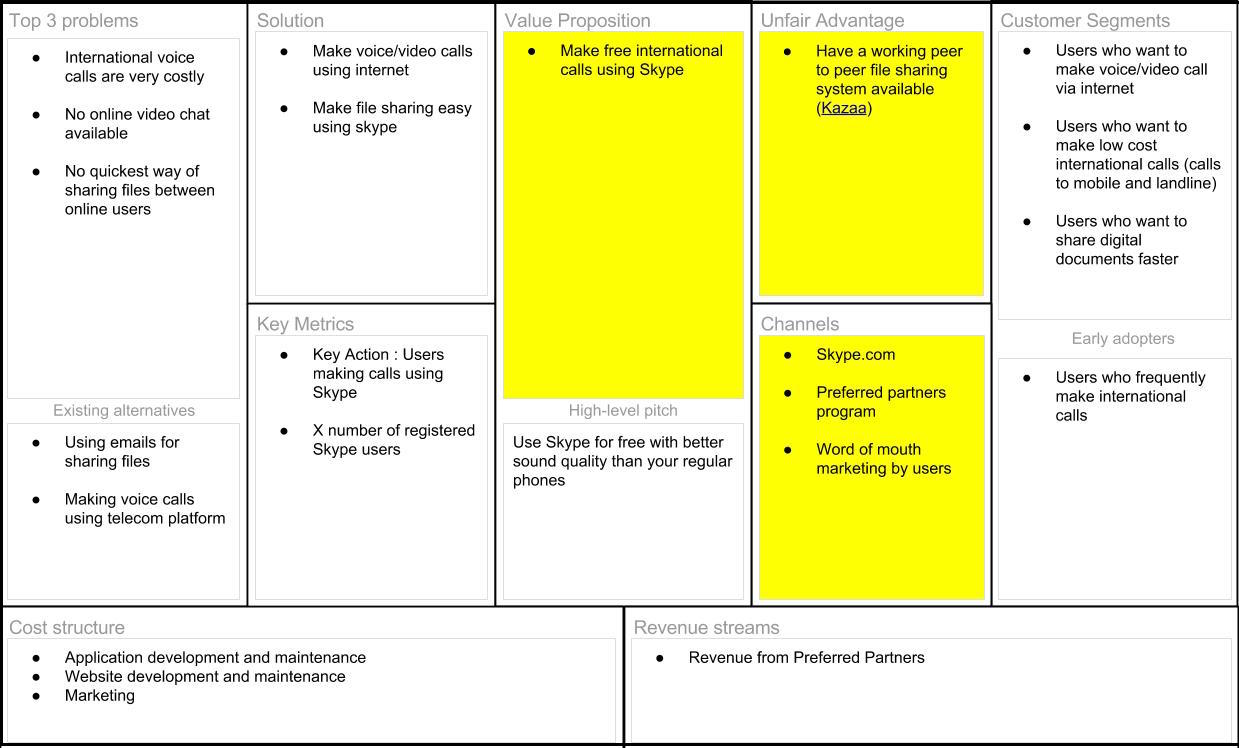 The highlighted blocks in the Lean Canvas are the ones which in my opinion helped Skype to win over their competition and go ahead to revolutionize the communication industry. Though Skype didn’t have the first mover advantage, they did certain things differently.

I have explained each block of Lean Canvas in detail below. If you are too eager to start on Lean Canvas for your business, log on to   https://leanstack.com/.

I would suggest you to go through the entire post before jumping on to create your first Lean Canvas.

Here're a few major problems that Skype tried to solve during its early days:

According to a survey done by Canada’s National Statistical Agency, a Canadian household spent over 1,000 CAD per year on regular and mobile phone calls, in 2004.  In UK, an average household spent more than the double - £960 per year.

Skype promised to challenge the outdated business models and rip-off tactics of legacy telecom companies and to bring global unmetered communications to people all over the world.

There were two set of users Skype targeted:

The early adopters that Skype targeted were individuals who were making international phone calls and spending significant amount of money for communicating outside their respective countries.

Skype’s Unique Value Proposition was to give away the core product for free, and up-sell additional services. That meant free calls to all Skype users. This attracted many users to use Skype and reduce their cost on making international phone calls.

Skype’s high-level pitch was to provide the same call quality or even better for free between Skype users than normal phone calls with high call rates.

Skype voice chat allowed telephone calls between pairs of users and conference calling by using a proprietary audio codec. Skype earned a majority of its revenue from supporting for paid service such as calling mobiles/landlines from Skype (formerly called SkypeOut) and calling Skype from mobiles/landlines (currently known as Skype Number).

Kazaa was a music sharing applications built by the founders of Skype, Niklas Zennström, and Janus Friis. Kazaa was a peer to peer file sharing system which was commonly used to exchange MP3 music files and other file types, such as videos, applications, and documents over the Internet.

Initially, Skype relied on increasing the user base by word of mouth marketing. They also had Skype partnered programs partnering with Plantronics nudging the Skype users to get the best voice call experience by using their headsets and Siemens Mobile as their preferred cordless phone provider. Skype was featured in all preferred partners websites.

Through partner program, Skype got access to millions of users who would otherwise be out of reach for a small startup. Below are few other partners which helped Skype to get more users during the initial years.

Apart from the partner program, Skype increased its user base by word of mouth marketing by its users. In January 2004, the number of new users who got added daily was around 30000. By late 2005, the number reached up to over 200,000.

The unique value proposition of Skype and growing user base got them on all the leading business magazines. They got featured in Forbes Magazine in Feb 2004 edition.

Skype initially made money by partnering with other companies who sold headsets and Cordless phone. The partners were featured on Skype website nudging the user to buy their products for a superior call quality. SkypeOut (Calling from Skype to Mobile/Landline) was an additional service for which users had to pay for. The SkypeOut service was cheaper than phone calls.

The majority of the cost incurred by Skype during the initial days was on developing and maintenance of the application, maintaining the website with the latest information and marketing activities.

The key action that Skype wanted its users to take was to make calls using Skype. In order to track this, the one metrics that mattered during the initial days of the Skype business was the growth rate of registered Skype users. This metric defined the success of Skype’s business.

Kazaa was bought by Niklas Zennström and Janus Friis who later founded Skype and used the peer to peer technology which was used for sharing music MP3 files and other video files for making free calls among skype users.

The following are some of the techniques that Skype employed to deliver state-of-the -art IP-based voice chat system.

Skype users were able to call each other even when firewalls and NAT’ed nodes were present between them. This was because the calls were routed using NonFirewalled Clients and publicly routable IP addresses.

Several new techniques were also developed to avoid end user configurations which would prevent them from making voice calls. In short, Skype worked well even when firewalls existed without any special configurations.

2. Globally decentralized user directory: Most internet based communication tools need to track users with a central library which logs each username and IP number to know if a user is online or not. Central directories are extremely costly when the user base scale up to millions. By decentralizing this hungry resource infrastructure, Skype was able to focus all its resource in developing cutting-edge functionality.

In order to deliver a high call quality with low cost, Skype developed a third generation P2P technology (3G P2P), Global Index. Global Index technology is a multi-tiered network where supernodes communicate in such a way that every node in the network have full knowledge about all the users and resources with minimal latency.

3. Intelligent routing: Skype kept multiple connections open and dynamically chose the best-suited connection at a given time to increase the call quality and reduce latency.

4. Security: Skype encrypted all calls and instant chat messages for unrivalled privacy. Encryption was necessary because all the calls were routed through the public internet.

5. Simple UI: Skype had simple UI and a user could set it up with minimalistic configurations. Users who could use windows and telephones could start using Skype almost immediately.

The problem that Skype wanted to solve resonated with the problems that users had. There was a need to design a product that provided good call quality or even better than conventional telephones but with lesser cost. Skype leveraged the fact that they had the best peer-to-peer technology which was used in Kazaa and developed on the same technology for building a voice chat system for free. This revolutionized the way we communicate.

Excited to chalk out your business plan and learn more about the unique value proposition that your business has? Log on to   https://leanstack.com/ to create your Lean Canvas today.